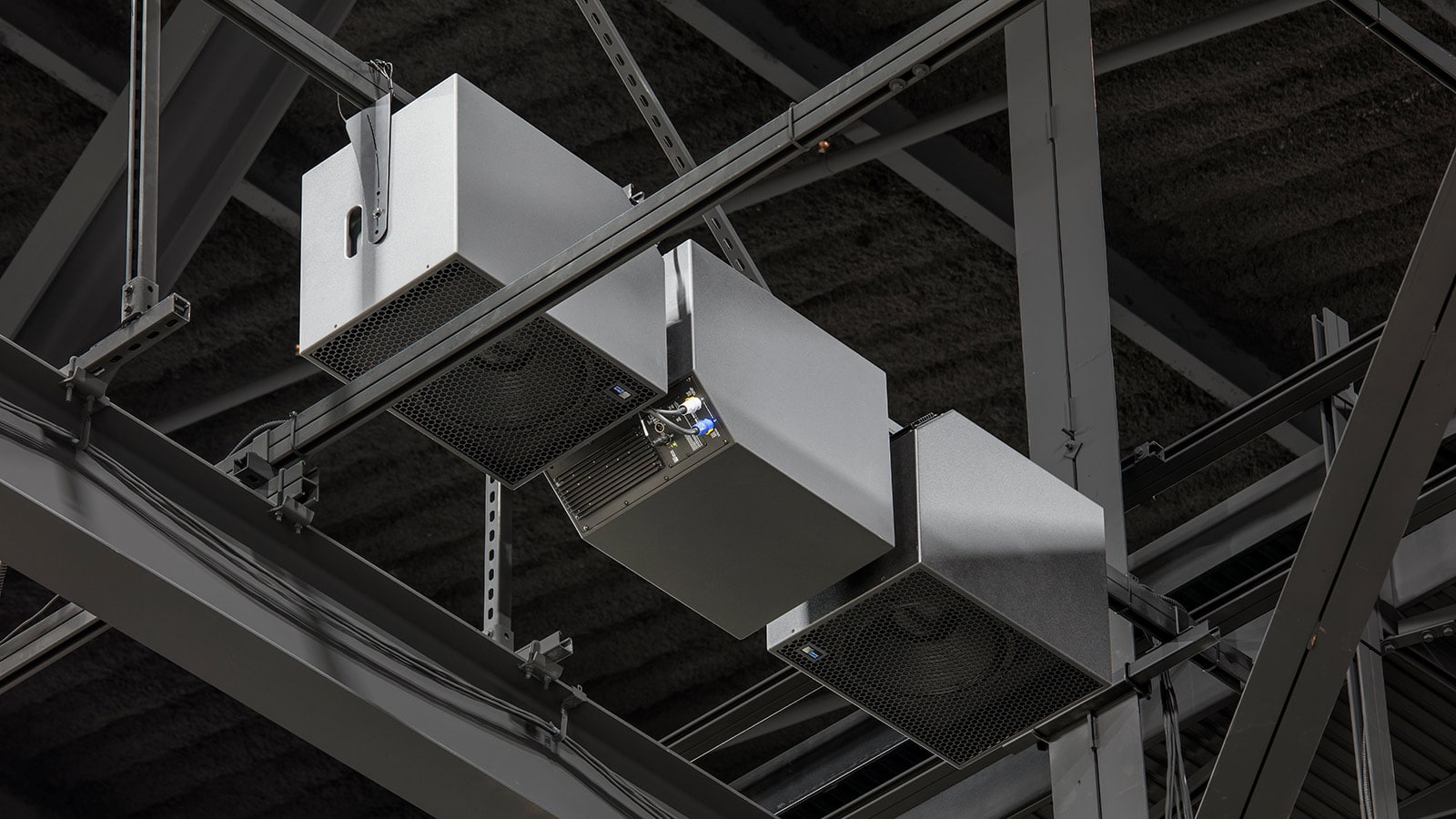 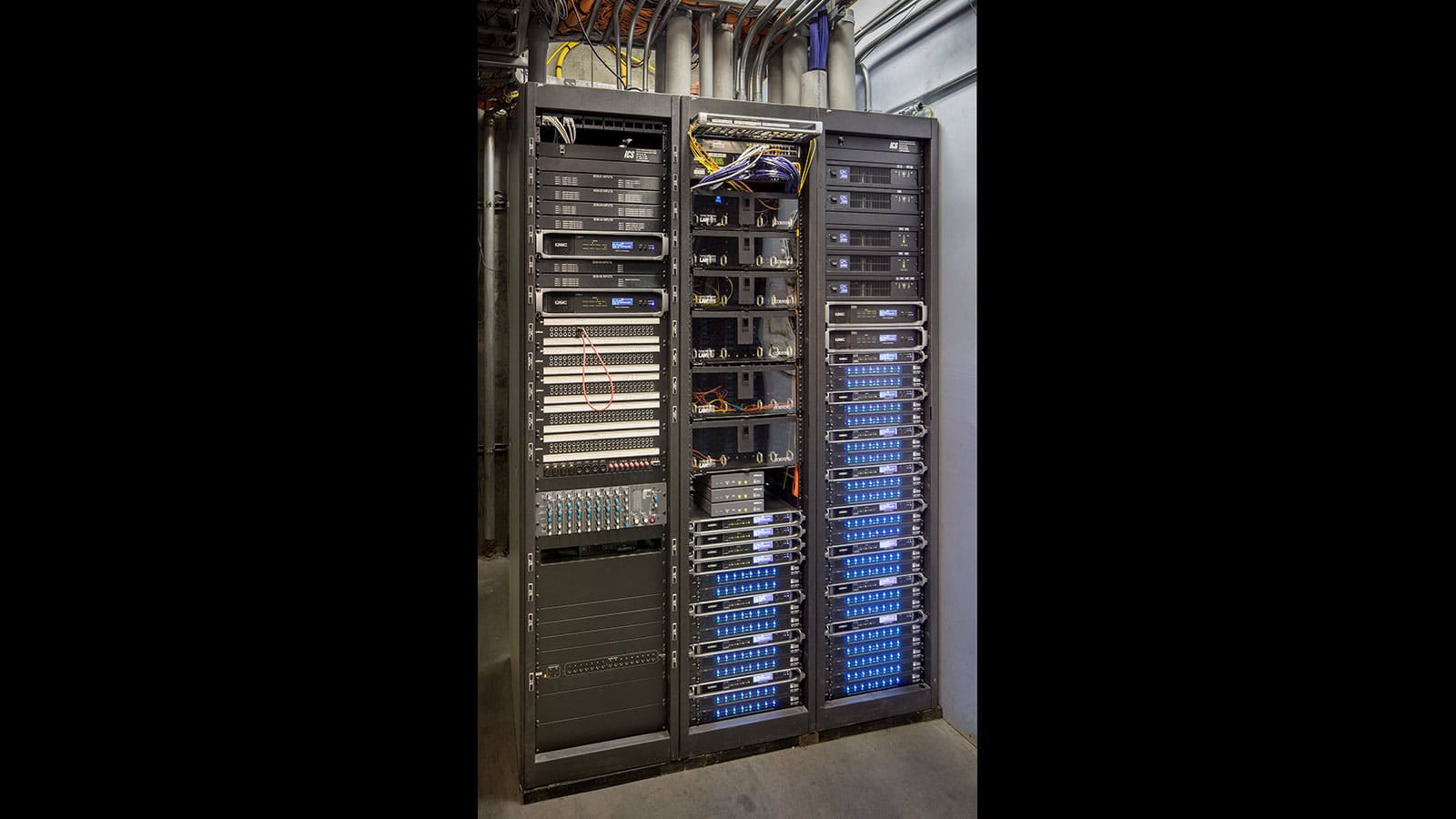 San Jose’s McEnery Convention Center has vaulted to the forefront of global meetings, incentives, conferencing, and exhibitions (MICE) technologies with their installation of the world’s first self-powered Meyer Sound exhibit hall overhead systems. With 226 individually addressable loudspeakers plus 60 subwoofers, this unprecedented solution not only provides flexible, full bandwidth response in standalone operation but also accommodates use as a delay system when temporary line arrays are deployed for large conference sessions.

As the largest meeting and exhibition facility in Silicon Valley, the McEnery Convention Center is hard pressed to keep one step ahead of expectations set by users like Apple, Facebook and NVidia. The requirements of an unusually sophisticated and demanding client base were factored into a recent $22 million renovation of AV technologies and other user amenities in the three main exhibit halls. Spearheading the drive for a think-outside-the-box approach was Tim Foster, director of production for Team San Jose – the management group charged with operation of the facility on behalf of the city.

“Silicon Valley is the global epicenter for innovation,” states Foster, “and that innovative spirit extends beyond IT and Internet to new applications of AV technologies. We decided to look at ways to meet or exceed all client expectations by doing things that other meeting facilities cannot do effectively. And that required a new way of thinking.”

Foster was familiar with Meyer Sound from his prior career as a production manager for artists like Neil Young, Jefferson Starship and Norah Jones. “Meyer Sound stays on the forefront of technology,” he says. “I knew they would understand our needs and give us the most bang for the buck.”

The first phase of the project was removal of the old drop ceiling that held a T-bar-mounted constant voltage system. Removal exposed barrel-shaped ceilings that generated reverberation times of close to seven seconds, but under the direction of consultants Charles M. Salter and Associates, the mid-band RT60 was brought down to just over one second with aggressive acoustical treatment.

The new sound reinforcement system was designed and installed by Integrated Communication Systems of San Jose, with Mark Berlo heading the design team for all audio components as well as control infrastructure.

A core proposal was to implement a ceiling sound reinforcement system that could integrate seamlessly as delay systems whenever front line arrays are brought in for conference sessions. But in order to accomplish this regardless of the zero point (stage location), the system would not only require linear, full bandwidth response but also offer the ability to delay each loudspeaker individually.

“When Tim Foster explained the goals for this project, I knew we would have to put in a system that would be accepted by A-1 engineers hired by prestige clients for major events,” Berlo relates. “Also, in order to seamlessly integrate with front arrays we would need a system with linear phase and frequency response. The loudspeakers had to be compact and lightweight, and we had to provide the ability to delay each loudspeaker individually so that we could adapt to a zero point at any stage location.”

“IntelligentDC is really the only cost-effective way to get that ultimate level of performance and total flexibility for delaying each loudspeaker,” says Berlo.

The MPS-488HP units receive dedicated signals for the 226 main loudspeakers from the newly expanded networked DSP system, allowing each loudspeaker to be individually delayed, equalized or muted. “I can access any and all loudspeakers separately on my iPad,” notes Foster.

The main loudspeaker selected for the project was the UPJunior-XP, a compact two-way system weighing 26 pounds and offering a precisely defined 80 degree by 50 degree coverage pattern. To extend flat system bandwidth to the lowest octaves, an added total of 60 Amie-Sub subwoofers are configured as 20 triplets in cardioid configurations.

“The directional control of cardioid configuration was essential for controlling bass bounce from the barrel-shaped ceilings,” says Berlo, “and it is remarkably effective.”

Berlo is confident that the innovative new system will pay dividends. “The space is now much more usable for a wider client base. In the meetings business time matters, and the time it takes to set up and tune delays can be critical in scheduling — sometimes adding another day. That’s not needed here, and it’s something that is not offered anywhere else that we know of. I’m pleased with the way it turned out, and we’re very proud of it.”

For Tim Foster of Team San Jose, the audio renovation marks a turning point. “We’ve broken a barrier in our ability to leverage in-house technologies, and Meyer Sound is the most significant component in that breakthrough.”

Related Products
8-channel External Power Supply
Model: MPS-488HP
Ultracompact VariO Loudspeaker, IntelligentDC
Model: UPJunior-XP
Compact Cinema Subwoofer
Model: Amie-Sub
You must be logged in to add more than four items to your comparison list.
Register today!
With a free My-iQ account, you'll be able to keep track of the latest updates and event notifications from your favorite AV manufacturers, manage your own projects and discover new pro-AV products.
register now
close
Thank you!
Someone will be in touch with you shortly.
Contact McCann Systems
close